What a great time I’ve had in Mississippi!!
Week began in Jackson with rehearsals with a great band!
The musicians were from Nashville and Jackson.
The rest of the week was filled with even more rehearsals and interviews for radio and newspapers. 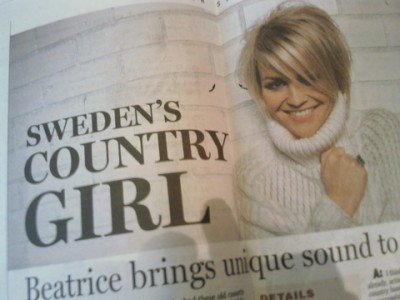 The concert at The Auditorium was on Thursday. The place was sold out and it went really great!
The musicians played awesome and it really sounded good!
Thanks guys and girls!

The day after we all went down to the coast to Biloxi to get ready for the annual NGA event (National Governor’s Association).
It was 36 years ago Mississippi hosted this event where all governors from the US gather for meetings and entertainment.
And there was I – little Beatrice from Sweden. It sure felt special. What an honour!
Other artists were r n’ b singer Brandy, Paul Overstreet songwriter from Nashville, The Williams Brothers and Eddie Cotton.
The show became a success! The audience was very pleased and so was I.

The day after, I went down to New Orleans to sing at the Scandinavian church. We also got to see the town a little.
New Orleans is really cool.
Then back to Biloxi again for meetings and pool party :).
Check out the pictures!

Now we have landed in New York. Yesterday I had a concert at the Swedish Church on Manhattan. That was a lot of fun.
Now I’m just gonna enjoy the city for a couple of days.
Dinner tonight :).